In this scene Freddie Thorne rouses workers to strike. Here’s a transcript.

Freddie speaks from the stairs, looking down on a sea of workers:

Comrades, we are here today to take a vote on strike action. But before we have a show of hands for that, let’s have a show of hands from all of those who fought in France. All those who stood side by side with your comrades and watched your comrades fall. Raise your hands. The blood shed on Flanders fields. The sweat of your brows. Who reaps the rewards? Is it you? Is it your wives? Who then? Do they stand among us? Or do they sit at home, comfortable, with a full belly, while you scrape to find enough to put food on your children’s feet? And what is the reward they offer you for your sacrifices made? A fucking cut in your wages. That is your reward. Raise a hand all those who want to strike.

So, Freddie unleashes a passionate call to strike, delivered with relish by actor Iddo Goldberg.

But what’s it all about?

Flanders Fields was a major ‘Western Front’ in World War 1 and the grave of many soldiers. It became the subject of a famous poem In Flanders Fields.

Between 1915 and 1917 there were several major offensives along this front. Among the most costly of these was the Battle of the Somme with more than a million casualties.

The first season of Peaky Blinders is set in 1918, one year after the October Revolution in Russia, commonly referred to as Red October, the October Uprising or the Bolshevik Revolution.

It was an armed insurrection to overthrow an autocratic government and gain state power.

During this time, urban workers began to organize into councils (Russian ‘soviets’).

Is Freddie trying to organize workers not only to strike – but to rise up, take control from the government and give the power back to the people?

Who reaps the rewards? Is it you? Is it your wives? Who then? Do they stand among us? Or do they sit at home, comfortable, with a full belly, while you scrape to find enough to put food on your children’s feet?

According to Wiki it was the October Uprising that

initiated the establishment of the world’s first self-proclaimed socialist state.

Founded by Vladimir Lenin and Alexander Bogdanov, the Bolsheviks considered themselves the leaders of the revolutionary working class of Russia.

Does Freddie Thorne consider himself leader of the revolutionary working class of Great Britain?

And how how does this connect to Thomas Shelby and his criminal gang The Peaky Blinders?

In the penultimate scene of the opening 10 minutes Steven Knight takes us back to our main Antagonist, and we discover Freddie Thorne is on his wanted list as well. 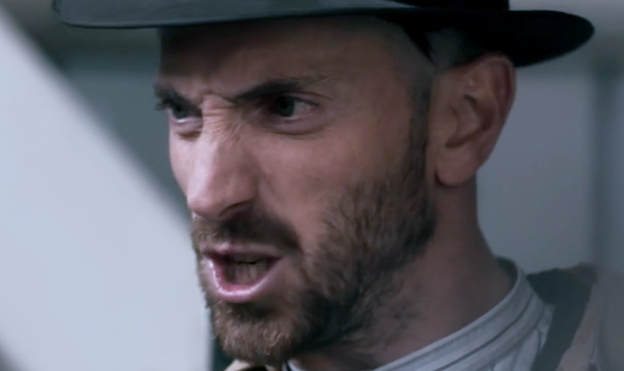