4 things to remember when writing our scenes:

Everyone is doing something. Take Frank and Clare Underwood in House of Cards. They don’t just sit and talk. They share a cigarette. Their ‘secret’ habit. In a later season Frank takes up a new hobby of painting his little soldiers. What secret habits or little hobbies do your characters have?

a) In any specific moment.

b) In a specific scene.

c) In this story.

In this scene between Hannah and Dexter there is a constant battle for power.

Read an analysis of the scene here.

In her book To Be a Playwright Janet Nepris says it’s when characters can no longer keep inside what they truly feel that we reach the highest point of drama in a scene.

Until that point we speak to conceal the truth.

Check out this post exploring how Woody Allen uses subtext to foreshadow the violent climax in the clever, Oscar nominated Match Point.

So, four things to remember as we work on our scenes: action, desire, power play and subtext. 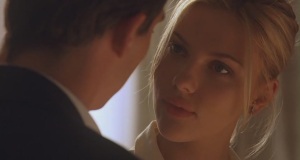