We’re onto scene 8 and answering this question:

What is revealed in this scene about character?

First we’ll focus on action. In the next post we’ll explore the dialogue.

The only real action in the scene revolves around Arthur and his bottle of rum and Thomas’s cool, controlled presence in the face of Arthur’s blustery anger.

As the scene begins, Arthur slumps drunkenly into his seat.

In the screenplay, Steven Knight describes:

The office has a photograph of the King dominating the wall. Beneath it sits the King of the Shelby gang, Arthur Shelby.

Even though we don’t actually see this photograph until later in the scene, Steven Knight is making a strong statement about the story genre and one of the major themes:

The Rise of a King.

Read more about this here.

However, back to the scene. Let’s see how Arthur’s character plays out visually.

First, we see him sitting back on his ‘throne’ full of pride, as Steven says, The King of the Shelby’s – yet with his right hand on the bottle.

His leaning back might show us he is on the defensive. As Steven Knight describes in his screenplay, he “feels threatened.” 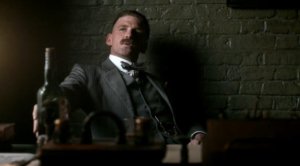 Next, Arthur pours his rum. 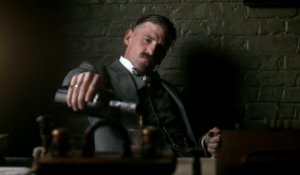 The director pulls us in close on the sauce of Arthur’s weakness:

Again, the director brings us in close: 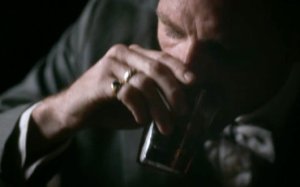 Finally, we see the fruits of Arthur’s labor, as he becomes – as the writer describes – angry and blustery.

Thomas, however, remains calm, cool and self-controlled as his brother erupts into drunken anger. 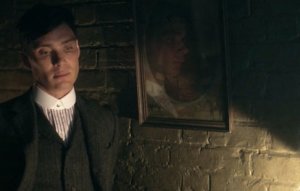 So, from this action, what do we learn about Arthur’s character?

1. He has a problem with alcohol.

What do we learn about Thomas?

4. He looks down (literally) at his brother’s drinking, possibly with pity and disappointment, but also full aware that his brother doesn’t have the self-control or thought process to build the business empire Thomas dreams of.

Stay tuned for the next sneaky peak at Peaky Blinders!